New Years Day is Day 7 of the 12 days of Christmas.

At our church’s New Years’s Eve service, we were told what the word of 2015 would be.  It was announced that the word was B-O-L-D Bold.  The content of the sermon included the two sides of God-the Lion and the Lamb and that the Lion side of His nature would appear more in the New Year.  What a surprise then, or was it,  to wake up on New Year’s Day with the front page of our local newspaper with this article about Pope Francis being the person of the year.  The word BOLD was prominently displayed in the title of the article. 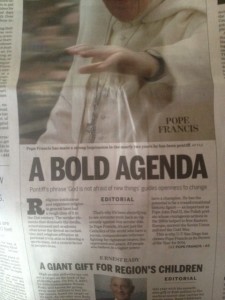 I got to thinking about what that word BOLD  means to me.  I pondered how sometimes people like to take each letter of a word and make additional meaning to it and came up with this expanded meaning for me.

The word inspired me to start to take action to get things done on the dreams that I have desired for a long time. The desires that He put in me. After spending 2014 doing some major inner healing work, being very quiet and often times alone among the sheep, this new word encourages the Lion in me to step out in the accompaniment of our Lord and get things done. There’s all those dreams that have been brewing and all those items yet to be realized. It’s time now to do them. To roar, to stand up, to fight if needed to be all that the Lion and Lamb has promised all of us to be.