I thought it was just a small diversion to explore a new city after driving for four hours from North Carolina toward Philadelphia as we prepared for a church meeting my husband had been invited to. I told him, “let’s take this exit and see what’s there.”

The city looked inviting after driving through woodlands. It would be something different. We exited and noticed that there were very few cars in the area even though it was just past the drive time hour. Strange, I thought as we looked for a parking space. We spotted a beautiful white building that was surrounded by construction and detour signs. “This would be a nice place to walk around,” I said to my husband. He has slowly learned to give in to my detour requests as many times what happens afterward ends up in his sermons. He’s an evangelist.

We stopped the car and asked a mom and her two kids for directions to a restaurant. It was dinner time. Nothing seemed strange about the request. The mom pointed to a couple of restaurants. After, we found a parking space and noted, again, that it was weird that there were so few people walking on the streets.

“I’m not sure it’s safe to walk here,” I commented as I spotted a few people on the streets. There were unkempt looking skater men and homeless people. Please note that I love talking to homeless people in downtown San Diego where we live, it was just that this place seemed different. My husband didn’t say much as he parked the car. We found our sneakers and put them on. We needed a bathroom so we headed toward a 7-11 and CVS but when we got there both of their doors were locked. Weird, again as it was only about 6:30 p.m. when places like that are normally open.

We peered down the street and looked for open doors. At about the same time one man started walking in back of us and another joined up with him shortly after walking dangerously close to us. They were the only other people on the street. I started to look behind me but my husband told me not to look back as he grabbed my hand. We found a waffle and chicken place that was thankfully open and walked inside, glad to lose the men trailing behind us.

My husband asked the young guy behind the counter, who appeared nervous, why the streets were so empty. He said a big storm had just passed through and everything had closed early. 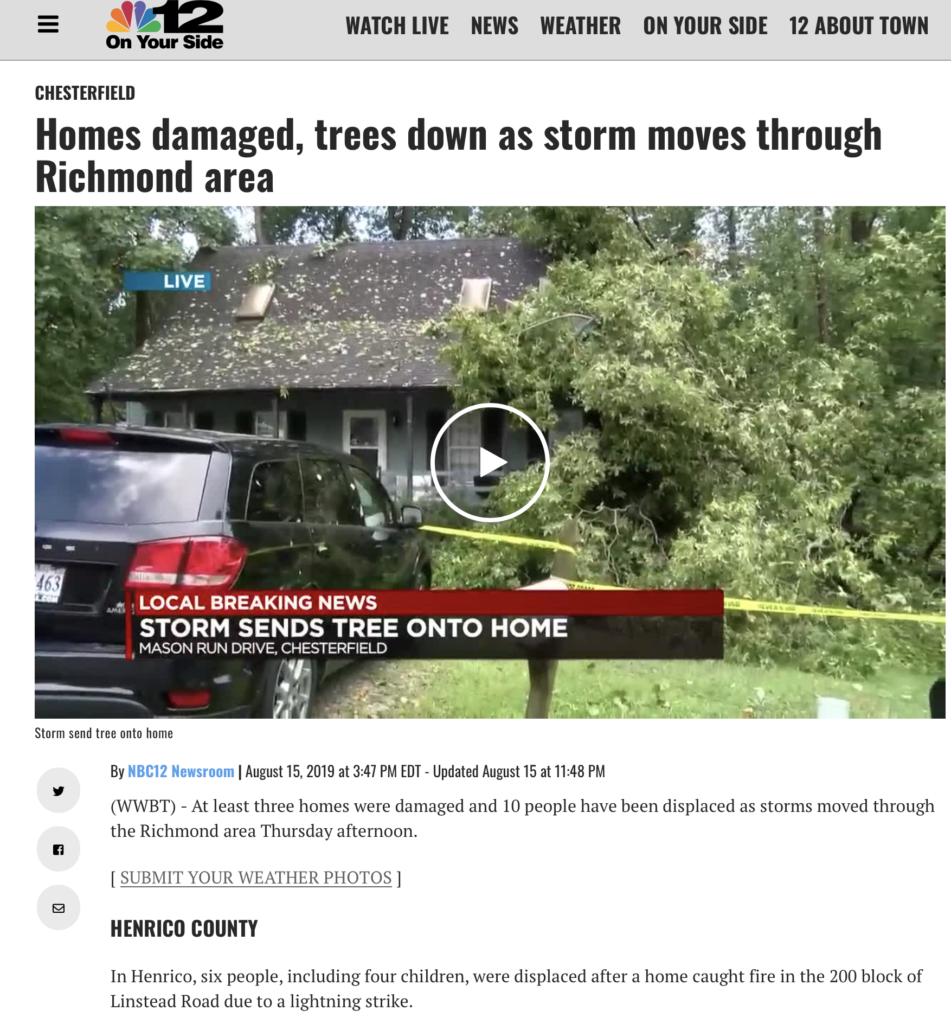 It was sunny with just a few clouds by the time we arrived in the city. We decided to eat at the small restaurant and prayed about what to do next. I wanted to see the old architecture of the city but it didn’t seem safe with so few people around. We decided to walk back to our car and drive around before heading back on the road.

As we were driving I decided to do a google search on the area. We had dropped into Richmond, Virginia, a place I had never visited before. I found that the city has the highest crime rate in the country, and there had been three separate shootings in the area over the previous weekend.

“Just this past weekend eight people were shot in about a 12-hour span,” noted a segment from an article posted on the area’s CBS 6 website.

We gave a sigh of relief as we drove onto the freeway leaving the deserted city behind us. We gave thanks to God for protecting us in the middle of the storm.

1 Thessalonians 2:2-We had previously suffered and been treated outrageously in Philippi, as you know, but with the help of our God we dared to tell you his gospel in the face of strong opposition.

0 comments… add one
There’s No Room For Hate, Only Love
First Day of Summer Tea Party